Emmaus is a borough in Lehigh County, Pennsylvania

Formed in 1759 as a closed Moravian village on land owned by the church, Emmaus became incorporated as a Pennsylvania borough a hundred years later in 1859. Arrival of the railroad in the same year expanded the town’s opportunity for manufacturing and other business. Its initial industries included iron mining, iron furnaces, a foundry and a machine company. In the late 1800’s additional industries included silk manufacturing, cigar factories, bottling companies and others. 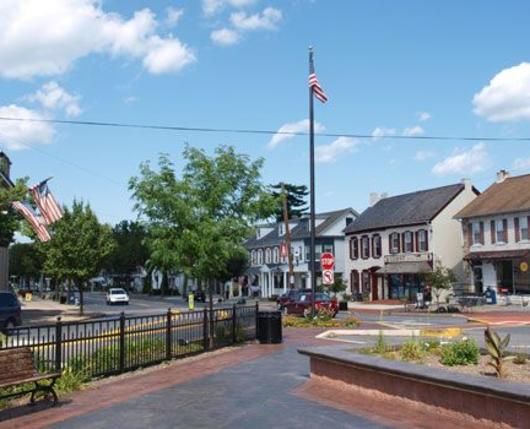 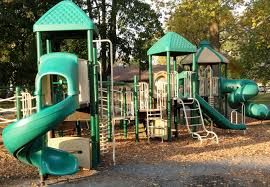 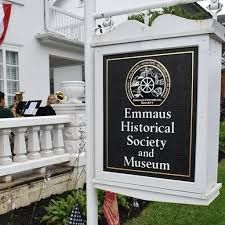 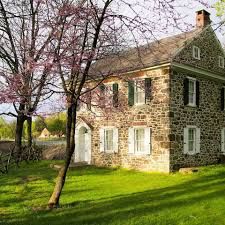 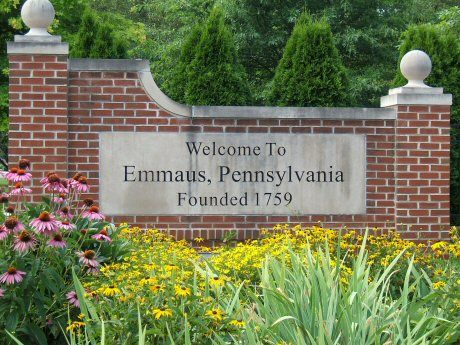 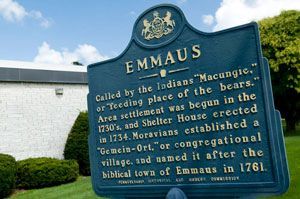 Find all calendar events and meetings for Emmaus Borough

Emmaus (/ɛˈmeɪ.əs/ em-AY-əs) is a borough in Lehigh County, Pennsylvania, in the United States. It is located 5 miles (8.0 km) southwest of Allentown, Pennsylvania, in the Lehigh Valley region of the state. It is 50 miles (80 km) north of Philadelphia, Pennsylvania's largest city, and 20 miles (32 km) west of the Delaware River.[3] Emmaus is located in the Allentown-Bethlehem-Easton, PA-NJ Metropolitan Statistical Area.

The population of Emmaus was 11,211 in 2010. The borough has been given many awards, including the Delaware Valley Green Building Council's Sustainable Community Award. In 2007[4] and 2009,[5] Emmaus has been listed as one of the top 100 "Best Places to Live" in the United States by Money magazine.

Origin and spelling of name - The borough was named for the biblical village of Emmaus[12] (now within modern Israel), where, according to the New Testament, Jesus was seen by his disciples Luke and Cleopas following his crucifixion and resurrection.

From its founding in 1759 until 1830, the settlement's name was spelled Emmaus. From 1830 until 1938, however, the community used the Pennsylvania Dutch spelling of the name, Emaus, to reflect local language and the significant presence of Pennsylvania Dutch. In German into the early twentieth century, the name had been spelled with a line above the m, which indicated a doubling of the letter, which had also been the usage in English into the sixteenth century. Since this tradition had died out in English, the line was often omitted in spellings of the name, which became confusing to the now more prevalent English speakers. In 1938, after petitions circulated by the local Rotary Club, the borough formally changed the name's spelling to Emmaus, reflecting the spelling in the Gospel of Luke in the English New Testament.

19th century - Iron ore was discovered nearby in the 19th century and served as a source of industrial growth for much of the 19th and 20th centuries. In 1859, the East Pennsylvania Railroad (later part of the Philadelphia and Reading Railroad) brought trains to Emmaus. That same year, the town was incorporated as a borough. In 1869, the town's first blast furnace opened. The largest iron company was Donaldson Iron Company, which made cast iron pipes and other products until the company closed in 1943. During the 19th century, Emmaus was also a center of silk and cigar manufacturing.

Population trends - In 1940, public census statistics showed that 6,731 people lived in Emmaus. The population of the borough has since nearly doubled to 11,313, as of the 2000 census. Housing construction has reached the borough line in all directions, so significant continued population growth in the borough is unlikely. Outside the borough line, however, the local population continues to grow, particularly in neighboring Lower Macungie Township. Consequently the growth is found within the Emmaus ZIP code but not its borough limits.

According to the United States Census Bureau, the borough has a total area of 2.9 square miles (7.5 km2), all land, though part of the Little Lehigh Creek, a tributary of the Lehigh River, flows just outside the Emmaus border with Salisbury Township. Emmaus borders South Mountain, a large mountain range. The town's elevation is 436 feet above sea level. Emmaus is located at approximately 40°32′13″N 75°29′45″W.[7] It has a hot-summer humid continental climate (Dfa) and is in hardiness zone 6b. Average monthly temperatures in the downtown vicinity range from 28.9 °F in January to 73.5 °F in July.

Emmaus is served educationally by the East Penn School District, a public school district that accommodates kindergarten through 12th grade.